Hilary Coleman grew up in Calstock in East Cornwall and learnt a lot of the Cornish pub songs through being part of Calstock rowing club who rowed 18 foot flash boats (the only gigs in those days were at Newquay and The Scillies!)

At the Queens Head in Albaston she heard singing such as Lamorna and The Old Grey Duck led by Dave Bassett nicknamed ‘The Choirmaster’. She assumed this experience was normal and was unaware that it was part of a strong Cornish tradition. Another strong influence was hearing recordings such as the Boscastle Bow-wow recorded in 1975 which inspired her and her brother Will, to learn further songs such as Thousands or More. You can hear this original recording on the first track of the accompanying CD. She was inspired to undertake the project Shout Kernow because of her growing realisation of how important this pub singing is our Cornish culture.

At school in Callington, Hilary had formal lessons in singing and the clarinet, which provided a foundation for her later development from the age of 19, of Cornish music vocally and on the clarinet.

She co-founded the ground-breaking Cornish bands Gwaryoryon, Sowena and most recently Dalla (2000) and was heavily involved in researching and arranging Cornish traditional music for these bands which included writing songs and tunes in the idiom and using the Cornish language. She has toured extensively, representing Cornwall in other Celtic countries many times and has also recorded albums with these bands.

In 1998 she set up Cumpas (originally Cornish Music Projects) with Frances Bennett offering Cornish music workshops for schools, this led to arranging and writing songs with children and over a period of 10 years they developed an impressive track record for promoting Cornish music events and workshops across Cornwall to community groups as well as schools. As part of Cumpas she ran a two year vocal training course for primary school teachers and members of community choirs in 2009 which resulted in the production of two books: Lev Krev (Cornish for strong voice) and Hoolybus.

Her work with singers began in her own village, about 16 years ago leading a small group who sing Cornish songs, which include some of her arrangements, for local events and regular Shouts at The Countryman Inn in Piece. She has since introduced Cornish songs, including the pub harmony singing tradition to many other choirs and groups and now runs the Red River Singers in Pool.

In 2004 Hilary became a bard of the Cornish Gorseth for her services to Cornish music and took the name ‘Atamiores’ which means pioneer. 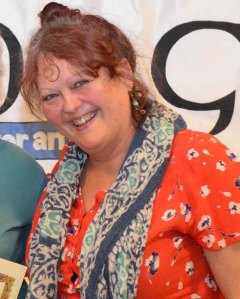 Sally Burley has a great interest in both singing and Cornish history and culture. She got her love of singing from her parents who were both fine singers: her mother won singing competitions in her youth, and her father sang with the Redruth Amateur Operatic Society in the 1930s. Her interest in Cornish culture and history has come through her father Joseph Mills, a keen historian who co-wrote The History of St Day, with Paul Annear.

As a child she lived in Boscastle, then Tremaine near Launceston. Whilst at school in Camelford and later at Launceston College, she sang in the school choirs, even appearing on the recording of Trelawney by the Sir James Smith’s School Choir on the LP Sounds Like North Cornwall! While a teenager she moved with her family back to her father’s birthplace, St Day, where she has lived ever since (apart from a brief stay in Redruth). Her earliest memories of pub-singing are as a small child visiting relatives in St Day in the lead-up to Christmas; her father would time the visit home to coincide with the singing of Cornish carols in St Day, these carols remain her favourite songs. In her teens and twenties as well as going to local folk clubs, Sally also heard plenty of singing in the local pubs, taking it for granted that it would always be there.

She met Hilary Coleman when her children joined a Cornish dance troupe, Otta Nye Moaz, in St Agnes. Hilary was playing clarinet in the band Sowena who played for them. Over the years their friendship strengthened, and Sally started to sing with Hilary in the Tregajorran Singers. Sally co-operated with Hilary in the latter stages of the Lev Krev project, and worked with her on Hoolybus. She helps with the running of the Red River Singers, and the Shout at The Countryman.